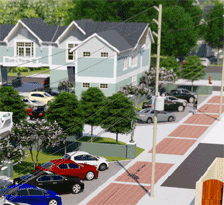 An asphalt alley just west of Florida Avenue in Dixieland would become a landscaped, brick-paved walkway accompanied by 48 one-bedroom apartments, under a concept envisioned by two developers and an architect.

Some “what-if” brainstorming led to a series of renderings showing a walkable connection between Cob & Pen and Dixieland Village. The pathway, designed for low vehicle traffic, would be shadowed on three of those four blocks with two-story apartment buildings.

The intended effect: add the urban density sought by city planners and create a buffer between businesses and the historic neighborhood’s bungalows.

“We thought: Why don’t you turn the back alley from an unutilized asset into a connector — somewhere where people would like walking from place to place?” said Gregory Fancelli, a real estate investor who has acquired most of the property west of the alley in the two blocks between Hancock Street and Park Street.

The other developer is Baron Realty President Cory Petcoff, a primary investor in Dixieland Village. “We’ve talked about doing multi-family on that property since we acquired it in 2006,” he said. “Rents have risen to the point that you could justify a new construction project.”

And the architect behind the concept is Steve Boyington, whose WMB-ROI firm just merged with The Lunz Group. He termed the drawings a strategy to transform vacant lots into tax-generating, buffer residences while still providing parking for nearby businesses.

Park Street looking south – before and after.
Click photos to enlarge.

All three stressed that the drawings are a first draft to get a conversation started about the future of the four blocks. They’ll be seeking input from city planners, neighborhood residents, the Historic Preservation Board (which got its first look at the plans last week) and the Community Redevelopment Authority (whose advisory board is scheduled to discuss the plans this afternoon.)

The renderings were drawn in part to support Fancelli’s request to demolish a dilapidated house along the alley at Park Street. The Lakeland Historic Preservation Board’s Design Review Committee granted that request last week, after its staff found that the house was in disrepair and did not offer a historic contribution to the neighborhood.

In her report favoring the demolition, Lakeland historic preservation officer Emily Foster said the conceptual plan calls for a “sensitive transition” between the businesses and the neighborhoods, but noted a lot more detail and several layers of approval will be needed to move forward.

The developers themselves noted that any construction is likely two years away at best.

And Fancelli admitted to the Historic Preservation Board that there’s an irony in his request to demolish a building since he is known for preserving structures such as the tudor house that was moved from Lake Hollingsworth to Florida Avenue to form the Cob & Pen and for salvaging historic artifacts in homes being demolished by others.

Petcoff praised Boyington for managing to preserve parking for his Dixieland Village shops and other businesses along the strip. The proposal includes:

Aerial views show the apartment layout and parking on the three blocks affected.
Click photos for a larger view.

In this case, residents would drive north on the alley, pass their parking spots and then and back in. The parking setup gives the driver a clear view of pedestrians and other vehicles when he or she pulls back out.

The alleys are platted at 10 feet and much of the driving area would remain that width, but 14 feet will be needed for areas with reverse diagonal parking, Boyington said.

Though the sketches don’t show it, Fancelli would like to see utility wires placed underground behind Hancock Street and Park Street, even if it means he has to foot much of the bill.

The apartments he has in mind would be one-bedroom units of around 700 square feet at an “attainable” cost. “That’s a complaint I hear a lot,” Fancelli associate Grant Miller said. “There’s not enough options that are suitable but realistic” in price.

He anticipates they would appeal to young professionals who work in the downtown and Dixieland areas and are attracted to walkable spaces.

For that reason, Fancelli thinks the alley project would pair well with an anticipated Florida Avenue “road diet” a block away that would reduce traffic lanes while providing wider sidewalks and roadside landscaping. A one-year test of the plan by the Florida Department of Transportation could start late this year.

Is Lakeland in danger of an over-supply of center-city rentals aimed at young professionals with the 10-acre Mirrorton project about to break ground north of Lake Mirror, two multi-story apartments approved recently for the Garden District and NoBay already in place?

“When I stop hearing from people who are looking for something like that, I’ll let you know, but it hasn’t happened yet,” Miller said. “I’ve never had more than three weeks’ vacancy on any of our activated projects.”