Request to Move Confederate Memorial Gets No Action

A resident’s request to move a 1910 monument to Confederate soldiers from the center of Munn Park to a historic museum received no support from the City Commission. Here is a recording of today’s 17-minute discussion, some key quotes and social media commentary: 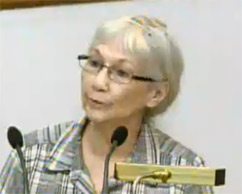 Resident Jo Ann Holmes:
“If Lakeland were to move the statue to a public museum of history it would be seen as a gesture of reconciliation, a furthering of comity in our community, another step toward goodwill toward men and recogntion that all Americans are equal before the law and in the eyes of society.”

Commissioner Don Selvage:
“You commemorate the service of the soldier. That statue on top of that  memorial does not memorialize the leaders or the people who led the South to secede.  It commemorates a soldier from Florida who served because his country called him to.”

Commissioner Keith Merritt:
“It seems to me that a proper recognition of emancipation might be the kind of the balance that we’re seeking. … We should recognize that what is now 13 percent of our population was set free. … Maybe we should start as a community working on an emancipation memorial and recognize the good that came out of that terrible war.”

Commmissioner Philip Walker:
“So what if we take the statue down? That’s not going to change a person’s heart … If we don’t understand one another and  have not come to embrace each other’s ethnicity and understand other cultures, we’re still going to have a problem.”

Mayor Howard Wiggs:
“If you go back and look at the comments by many the young men who fought for the South, those folks were not out there to perpetuate slavery. They didn’t even know anybody who had slaves, some of them … It’s easier for us to judge today the evil that we see in slavery and unfairness and so forth and take it out of context of what life was like in the 1860s.”

Commissioners Jim Malless, Justin Troller and Edie Yates:
No commentary on the issue during the meeting. 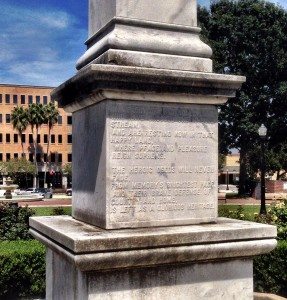 Inscriptions on the monument:
“In memory of that noble band, who have crossed the mystic stream, and are resting in that happy land, where peace and pleasure reign supreme. The heroic deeds will never fade, from memory’s brightest page, and their brave defense of country and home, is left as a glorious heritage.”

“This monument was erected by the Lakeland chapter, United Daughters of the Confederacy in memory of the noble sons of the  South. A D 1910”

A reporter tweets some background:

Addendum: After I posted this article, Lakeland writer Billy Townsend researched the statue and published his findings and commentary on Lakeland Local.
Addendum 2: The day after the Lakeland commission balked on the request to move the statue, Alachua County commissioners took the opposite stand regarding a 1904 statue in Gainesville.