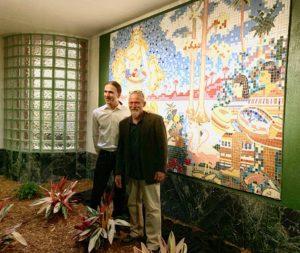 A tile mural created for a Publix store in Fort Lauderdale has been re-created by artist Tim Pitzen, right, and unveiled today at a former Publix store that now houses the Lakeland office of the Polk County Tax Collector. Standing alongside the artist is Gregory Fancelli, who spearheaded the project.

The original creamic-tile mural, titled “The Goddess,” was created during the 1960s by John Garth and was destroyed when the store was demolished during the 1980s.

The reproduction appears in two separate pieces along the front of the former Publix at 916 N. Massachusetts Ave. It was commissioned by Fancelli and other members of the family of Publix Super Markets founder George Jenkins, who hired Garth to create the original.