Plans are emerging for Mirrorton, the newly unveiled name for a high-end rental development planned for the vacant 10-acre site north of Lake Mirror and east of Lakeland Police headquarters. The company developing 305 multi-story apartments and townhouses there has released two drawings showing their vision for the community’s design. (Check the renderings after the jump.) 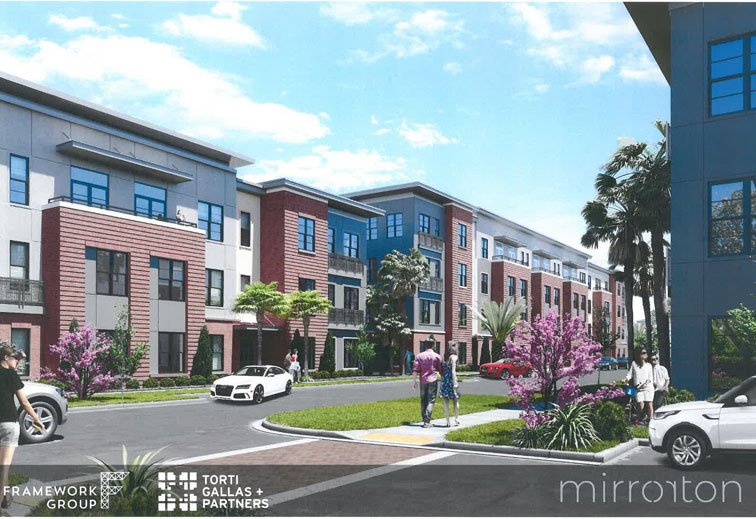 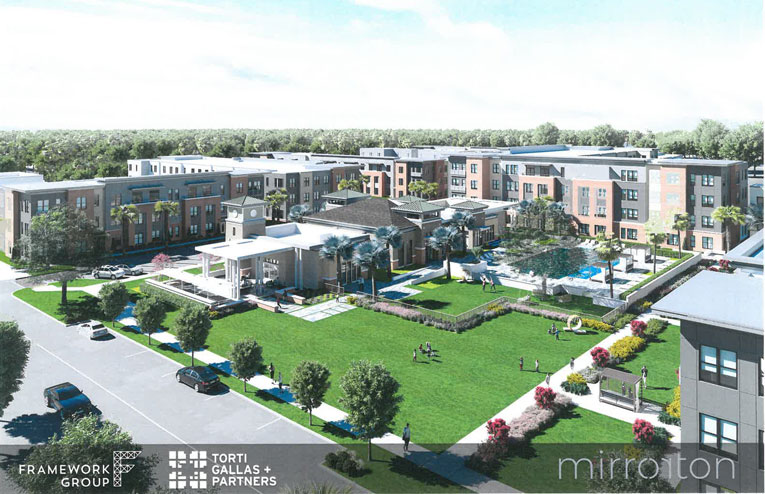 Lakeland city commissioners will get a chance to comment on the design concept at their 10 a.m. meeting Monday following a presentation by Phillip Smith, president of Tampa-based Framework Group, the company selected by the city to buy the land for $3.7 million and develop it.

The commission had asked for authority to review and approve “building elevations and exterior materials and color schemes” for the development, resulting in Monday’s scheduled discussion.

The name Mirrorton is already drawing puzzled reactions on Facebook. “Hope they second-guess themselves on that awkward name,” one commenter said.

But Nicole Travis, who is guiding the city’s relationship with Framework as director of the Lakeland Community Redevelopment Agency, said she likes the name: “It acknowledges Lake Mirror but has ton because the size of the property is large enough to be its own little town.”

Framework envisions Mirrorton as an enclave both connected to downtown but providing its own sense of community. Construction is expected to begin by the end of 2018, Framework says on its website.

Also planned are plenty of green spaces, including a dog park and a grand lawn next to the clubhouse.

“The site design is focused on establishing connectivity and a new urban feel, with orderly downtown blocks, on-street parking, minimal building setbacks, and pedestrian accommodations such as generous shade and sidewalks,” Framework says on its website.

Framework told city officials in October that the company plans to invest $58 million in the project. (View a presentation on the development agreement prepared for the City Commission then, a time that the site was being referred to as North Lake Mirror.)

The properties that make up the development were bought by the city for $8.5 million in 2004 and the homes on it were razed. Previous development plans were halted by the subsequent recession, and the land was appraised at $1.7 million in 2014.

The current city commissioners — four of them had not been elected when the deal was approved in October — have already seen the new sketches, Travis said. Their first opportunity to discuss it among themselves will be at their agenda study session Friday morning, although Travis anticipates that conversation will be brief and the real discussion will take place Monday morning.