Head bowed reverently, a seated figure cradles a folded triangle of a flag in upturned hands. That’s the image of sacrifice that student Cierra Grenier envisioned when she entered a sculpture contest honoring military veterans, police officers, firefighters and other emergency responders.

The image resonated with the contest judges, and they selected Grenier’s design from more than 50 entries to eventually be displayed in Veterans Park next to The Lakeland Center.

“Its simplicity and its intensity immediately conveyed an emotion,” said Tom Monaco, one of the judges and an artist who helped Grenier turn her vision into a 70-pound steel sculpture. About 3 1/2 feet high, it rests on a 2-foot pedestal — painted wood for now, but probably stone for the final installation.

Grenier’s creation will be unveiled at 5 p.m. Friday at CPS Investment Advisors, 205 E. Orange St. and will be displayed at Lakeland City Hall before being installed at Veterans Park next May, said Cynthia Haffey, director of Platform Art, which sponsored the competition.

This is the second of three sculptures Platform commissioned for Veterans Park. The organization received a grant from the Florida Division of Cultural Affairs that will support the final sculpture.

Grenier (she pronounces her last name Green-yer) is an 18-year-old freshman at Polk State College. A lifelong Winter Haven resident, she was a senior at Lake Region High School when she entered the contest. 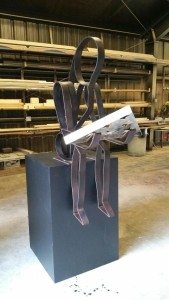 She constructed her entry out of card stock, paper “and a lot of tape.” After it was chosen by a panel of judges that included representatives of police, fire and military groups, she conferred with Monaco on the materials and colors for the piece.

Monaco taught Grenier welding and other skills needed to fabricate the sculpture at The Fourth Wall, Monaco’s Lakeland studio. “My job was to take her vision and help her realize it,” he said. “She’s the final arbiter of every decision that we make.”

Grenier’s high school art teacher, Angela Fout, “was there every stop of the way, as well,” Monaco said.

Grenier said several members of her family have been in the military, but she didn’t have any one individual in mind when she designed her artwork. “I thought when they look at this, it will touch them,” she said.

The soft-spoken young artist said she’s looking forward to Friday’s unveiling, but is glad she won’t have to speak.

View more photos and listen to a WUSF-FM report on the sculpture.