The consultant devising a homelessness strategy for the city of Lakeland is looking for a few good business people to serve on a steering committee to fine-tune and promote a solution.

“We need business leaders to be involved because this is going to be a game changer for economic development, tourism and the downtown district,” she said at the monthly Downtown Update meeting, held Wednesday at My Office and More.

Pourciau asked that the Lakeland Downtown Development Authority, the sponsor of the meeting, designate a representative for the steering committee.

Pourciau and her colleague Benjamin Toro-Spears have spent the last six months talking to local people and gathering data. The City Commission in June hired her organization for $80,000 to analyze homelessness in Lakeland and devise solutions.

Pourciau started her presentation with a few comparisons:

Despite a relatively high level of funding for existing programs, “It hasn’t reduced homelessness so there’s a disconnect,” Pourciau said.  “How come we’re bringing in all this revenue but the bottom line doesn’t look so good? Our report will address the disconnect and how to change that.”

Pourciau advocates a housing first approach, which contends it’s cheaper and more effective to integrate homeless people with jobs and social services if they are put in apartments quickly.

The approach reverses the traditional model of providing social services first and housing second, and it’s working in other Florida communities, including Tampa and Orlando, she said.

“It’s hard to get a job if you’re staying at Talbot House,” she said. “Shelters are an important piece of the system, but they should be a temporary place to stay while people are waiting to get into their apartment.”

Pourciau touts housing first benefits in a slide from her presentation at the Downtown Update: 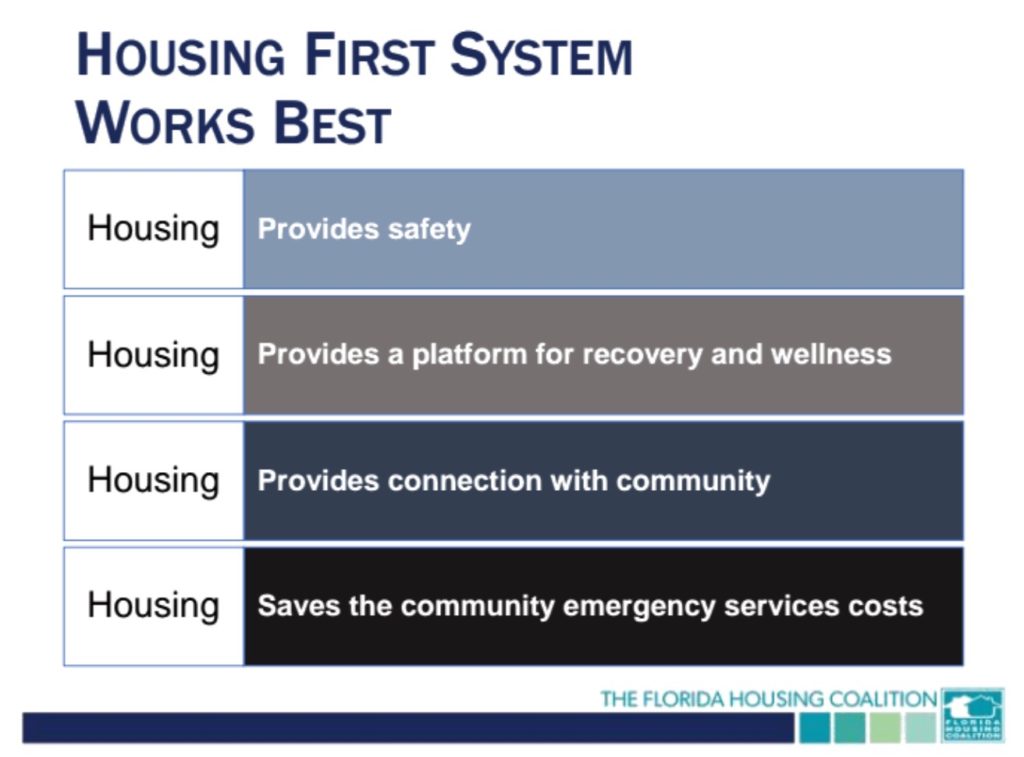 Orlando’s experience helped change the mind of the Lakeland Police Department’s liaison with the homeless community. Officer Jack Callahan, attending last week’s meeting, said he was initially skeptical of the housing first approach. But he said he started re-evaluating when he heard about an Orlando man who couldn’t keep a job when he was homeless because he kept getting arrested for drunken, disorderly conduct.

After getting into housing, he was asked by a visiting officer why only one beer was missing from a six-pack in his refrigerator. The man answered that he enjoys a beer after work, but when he was homeless, he would drink the entire six-pack because he didn’t have a way to keep the other five from getting warm. Because he had a refrigerator, Callahan said, he drank only one beer a night.

Housing first targets the “literally homeless,” Pourciau said. Those include people who sleep in temporary shelters, homeless camps, on the street or in their car.

In Lakeland, she’ll recommend identifying the 25 homeless individuals who cause the most problems for police, social service agencies and business owners downtown. Finding housing and services for those people will do a lot to reduce the quality-of-life impacts felt by others, she said.

“There’s a lot of concern about setting people up for failure,” she said. “That’s not what happens for 85 percent of the people.”

Pourciau was asked about reports that a highly touted housing first program in Canada was attracting homeless people from nearby towns. The difference there, she said, is that no neighboring communities were offering similar programs, while several Central Florida cities offer housing first initiatives. “If it’s true that people (travel) to housing first communities, then no homeless people would be in Lakeland,”she said.

Contrary to conventional wisdom, most homeless people in Lakeland have roots or family here or have been here awhile, she said.

Florida Housing Coalition anticipates finalizing its recommendations for the City Commission by July.

Pourciau’s presentation at the Downtown Update: