Gallery Owner: Thanks for the Support, Lakeland

Kimberly Wyant wants Lakeland to know she is grateful for the outpouring of support she felt after people learned last week that she’ll have to vacate the gallery/art creation/performance space she opened earlier this year.

She also wants people to know she has no beef with the people who own the building overlooking Lake Mirror where she rents space for her business, KRaP ART (KRaP stands for Kimberly’s Recycled Art Projects.) She said they’ve been supportive of her events and the outdoor murals that draw photographers to their parking lot.

And she’s grateful that Steve Scruggs, president of the Lakeland Economic Development Council, called her to say the LEDC will assist in her efforts to relocate her gallery. 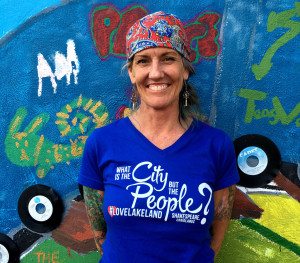 Wyant discovered that her business would need to move when she read news reports that her building will be demolished sometime next year to make way for Catapult  2.0, a $13 million expansion of LEDC’s business incubator.

Plans call for Catapult to move into the now-vacant Lakeland Cash Feed building, which is next to the building housing KRaP Art and Central Vacuum Cleaner Co., which plans to relocate.

Wyant said she has located a building in downtown Lakeland that would be suitable for her business and is in talks with the owner of the facility.

While she prefers not to disclose the location yet, she said it would be conducive to a gallery, studio and rehearsal space, a music performance venue, a planned series of family movie nights and a place to continue the children’s music, yoga and meditation programs that are currently affiliated with KRaP Art.

“It needs some work, but we have manpower. We can come up with the volunteers and we’re willing to get greasy and dirty,” she said.

Once she reaches an agreement on the new space, she’ll know whether she’ll need to reach out to the community for financial assistance — particularly if she needs to pay rent in two locations for awhile or if she’ll be responsible for building upgrades.

“We’re filling a gap,” she said. “We’re different than anything else in the community, and we don’t want to take away from anybody else’s business.”