On Tuesday afternoon, I heard a presentation about Lakeland Electric’s new online outage map. Early this morning, I got to experience it in real life when a transformer blew in our neighborhood near Dobbins Park.

I woke up sometime after 3 and as I stirred my wife asked, “Can you help me figure out the number we use to report an outage to Lakeland Electric?”

Instead of answering her question directly, I reached for my cellphone and checked the outage map. It showed me that an outage affected 24 customers on two blocks of our street and that we were expected to get power back around 5:20. With its Smart Meter technology, Lakeland Electric usually knows your power is out before you have a chance to report it.

(Somehow in my sleepy haze I didn’t think to get a screenshot to show you what the map looked like at that point or record the exact time the power was expected to return.)

I don’t know if the city is purposefully conservative in their time estimate, but the power was restored about an hour earlier than predicted. I wasn’t unhappy.

Here’s what the map looked like a few minutes ago:

The map showed two outages: one near Crystal Lake and one in Winston. Each outage affected a single customer. The Winston outage was reported at 8:20 a.m. with power expected to be restored two hours later. A time estimate wasn’t available for the Crystal Lake outage.

Unlike this map which pinpoints small outages, the one I saw early this morning outlines exactly which blocks were affected by the outage.

The map incorporates weather information since that often affects outages. On Tuesday, it showed heavy storms to the west of Lakeland. Information is available in both English and Spanish.

The map is powered by StormCenter technology from a company called KUBRA and is used by 45 utilities in the U.S., five of them in Florida. 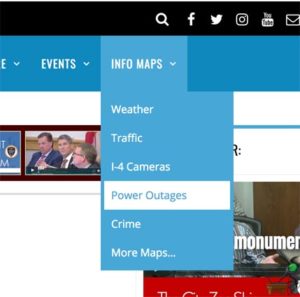 Commissioners said they were impressed with the updated map but wondered how electric customers would find out about it.

I thought to myself that it’s easy to find. Just go to LkldNow.com, click on the “Info Maps” tab on the top of our home page and select “Power Outages.”