Interesting. An out-of-town law firm is using Facebook ads to identify potential claimants for legal action against developers who built Lakeland and Mulberry residential communities on reclaimed land that had been mined for phosphate.

The Lanier Law Firm, with offices in Houston, New York and Los Angeles, wants to hear from residents of Oakbridge, Grasslands, Angler’s Green and Paradise Link who believe they have a claim because they weren’t informed of possible radon contamination. 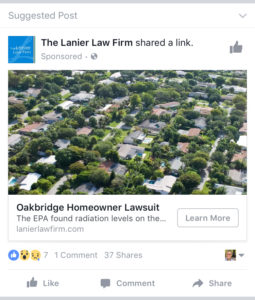 The firm is getting the word out in part through Facebook ads that presumably are targeted geographically. I received the accompanying ad headlined “Oakbridge Owner Lawsuit.” While I don’t live in Oakbridge, my house is less than a mile as the crow flies from the edge of the Oakbridge property.

The ad links to a bloglike article on the firm’s website titled “Florida Phosphate Contamination” that raises concerns about radon and asserts “home buyers were not informed about the potential health threats.”

(As The Ledger’s city editor during the time Oakbridge was developed in the 1980s, I remember plenty of news coverage about radon concerns. Whether sales agents informed potential residents about radon issues will become a major point of contention if a lawsuit is filed.)

The article includes a form and a local phone number where residents of the two subdivisions are directed to “contact us to start your claim today.”

Oakbridge and Grasslands, situated along Harden Boulevard north of the Polk Parkway, were developed by Drummond Co. on land that had been part of its Poseidon Mine. Angler’s Green and Paradise Lakes, located just west of State Road 37 in Mulberry, were developed on land mined by The Mosaic Co.