There’s an irony about My Office and More, a new business in the center of downtown Lakeland. The purpose of My Office and More is to offer emerging businesses big-office amenities without big-office costs. But the costs have been anything but small for Kate Lake, the 57-year-old entrepreneur who spent more than a year conceiving of a co-working space for Lakeland businesses and finding the right place for it.

When she finally found the right place – a 105-year-old building at the corner of Main Street and Tennessee Avenue — it had a hefty price tag: $1 million.

She’s not saying how much more she spent renovating, painting and upgrading air conditioning for the building after she bought it, but she did say: “It’s a God project. On paper, we shouldn’t be able to pull it off.”

In Lake’s case, perseverance paid off. After being turned down by five banks, Lake got a loan to buy the two-story building from Center State Bank, and she opened My Office and More earlier this month.

Why saddle her new business with the cost of buying expensive property?

Controlling the experience is essential, Lake explained. It’s a lesson she said she learned when working for the head of Disney Cruise Lines, which was created after Disney found that they didn’t have enough control when they licensed their characters to another cruise company. “Leasing a space is not an option.”

Bretta Christakos, the CenterState vice president who worked with Lake, said her team was intrigued by the project since the bank is committed to downtown Lakeland and to developing entrepreneurs. The package they put together includes 35 percent funding via a Small Business Administration 504 loan, 50 percent bank financing and a 15 percent down payment by Lake. 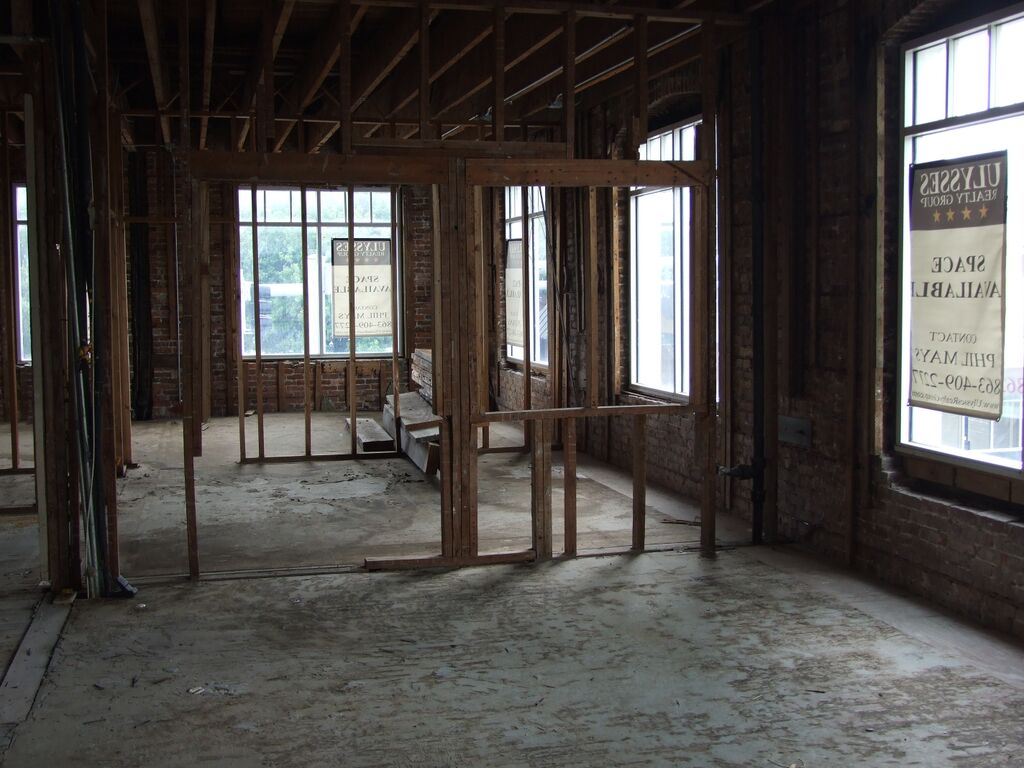 It’s a look that worked well for other co-working spaces she visited when she researched her venture. She particularly liked the Co+Hoots community in Phoenix, which she described as casual, communal, energetic and upbeat.

“So much has to do with the atmosphere,” she told businesspeople touring My Office & More during a joint meeting of the Downtown Lakeland Partnership and Downtown Development Authority.”

The spirit of collaboration is enhanced, she said, by having private offices on the periphery look out into an open area where clients rent desk space. Each desk has ample electric and Internet outlets, and clients have access to two conference rooms, a training room, copier/printer, mail service and other office amenities.

When researching her business, Lake said, she learned that 52% of Polk County’s 11,000 businesses are home-based, giving her a large potential client base.

Co-working spaces let free-lancers and others escape the isolation of working at home, an end to “coffeehouse chaos” and the need to drive to an office chain for sophisticated copier needs, Lake said. “It levels the playing field for small businesses.”

Monthly memberships range from $115 for a co-working desk to $530 for a private office.

The prices are higher than those charged at Catapult, Lakeland’s other co-working space, but Lake says her mission differs from Catapult’s.

Catapult, a project of the Lakeland Economic Development Council that is subsidized by corporate donors, serves as an incubator where budding entrepreneurs can try out their business models.

Lake said she’s glad Catapult exists because it proved co-working can work in Lakeland. She compared it to a seedbed where new ventures can take root. Once the plant starts growing, she said, it needs transplanting to avoid becoming rootbound. “Their atmosphere is about creativity. Our atmosphere is about commerce.”

The process to transform a decaying, 6,000-square-foot second floor into a modern workspace took only two months. She credits cooperation between architect Marlon Lynn, contractor Ed Forgue and city officials for the quick turnaround time. It helps, she said, that Lynn and Forgue showed plans to city development officials early and involved them in major decisions.

The building at 112 E. Main St. already has two dining spots – Divicious Deli and Coffee and Silver Ring Café – so that eliminated the expense of adding a dining facility, as found in some co-working spots.

In her first few weeks of operation, Lake attracted 13 clients and other potential clients had lined up tours.

“The story has just started. It’s about what people are going to accomplish and it’s going to change Lakeland,” she said.