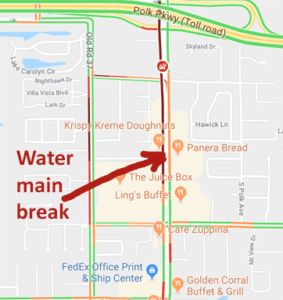 Southbound Florida Avenue lanes are closed south of the Polk Parkway because of a water main break at Doris Drive, the Lakeland Police Department reports.

It will be at least 9 p.m. tonight before the road re-opens, according to an LPD tweet.

At 1:45 p.m., Google Maps showed traffic congested past the Polk Parkway  to WalMart, and by 2:25 it was backed up nearly to Edgewood Drive.