Dissent Craft Brewing, which runs a popular taproom in a St. Petersburg strip mall, is planning to expand to downtown Lakeland. If approved by the city, it would be the fourth in a cluster of bars on South Kentucky Avenue and potentially one of eight alcohol-only establishments downtown.

The brewery specializes in what it calls “outspoken ales,” and its wide line of sometimes unconventional brews (Hazy-Mangover IPA, Blueberry Marshmallow Berliner Wiesse and Mexican Chocolate Cake imperial stout are popular) get a collective 3.83 rating by users of the Untappd app. That puts it in the same range as downtown Lakeland’s other beer maker, Swan Brewing, which has a 3.84 rating.

The taproom is planned for a 2,000-square-foot storefront at 125 S. Kentucky Ave., which most recently housed half of La Carreta Mexican restaurant.

Dissent’s Lakeland location will be classified as a nanobrewery, the smallest form of microbreweries, and will rely on the two-year-old sister brewery in St. Petersburg for the bulk of its brews.

The owners are considering offering some guest taps from other regional brewers and will serve several “upscale wines,” according to Kevin Stringer, a 30-year Lakeland resident who owns Dissent, along with former Lakeland resident Christopher Price.

Stringer presented plans for the taproom this morning to the Lakeland Downtown Development Authority board, which voted unanimously to recommend that the project be approved by the Lakeland Planning and Zoning Board and the City Commission.

LDDA Executive Director Julie Townsend touted the cluster effect in recommending approval. “Clustering these like businesses creates a more energetic and walkable district for the patrons,” she wrote to the board. “Clustering also is supported by law enforcement because not only does it allow for more efficient patrolling by law enforcement, but it also lends itself to self-patrolling — the  more people and eyes in a district discourages bad behavior.” 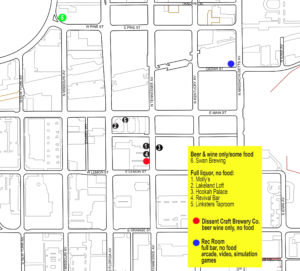 Townsend’s report included a map of downtown’s other bars, showing that most are centralized in the block just south of Munn Park. The two outside of that block are Swan Brewing on Lake Wire and Rec Room, a bar-arcade combo planned for the old Firestone building at Massachusetts Avenue and Cedar Street.

The LDDA board also heard from the founders of Rec Room today, and recommended that it, too, be approved by Planning and Zoning and the City Commission.

Stringer was optimistic that Dissent Craft Brewery could open between mid-November and early December, saying little build-out will be needed once approvals have been granted. The St. Pete location has a spare look, but Stringer said the downtown Lakeland site will be more upscale.

The building will require some extensive water-line upgrades to separate its connection from that of the Pita Pit restaurant next door. There will be some disruption to the sidewalk when city crews make the underground connections, Townsend said.

The venue is expected to hold 95 patrons. Tentative hours are 3 to 9 p.m. Tuesdays through Thursdays, noon to 10 p.m. Fridays and Saturdays, and noon to 6 p.m. on Sundays. No food is planned. There may be live music occasionally.

Stringer, 47, also owns Southern Site Development, a paving contractor. He said he and Price have both eyed the downtown core for a craft beer business.

Dan Thumberg, who owns Swan Brewing four blocks away, said he welcomes the competition. “It’s great for people to have more choices for craft beer in Lakeland,” he said.

He added: “I’m excited to see what happens with the Rec Room and the Yard of Mass. More options for people to go out and enjoy a frosty pint is a good thing. We welcome any collaborations.”

The Yard on Mass is a food-truck park and beer hall being built at the corner of Massachusetts Avenue and Parker Street next to the Mass Market complex. Its owners project a November opening.

One more brewery is planned for downtown Lakeland. The Joinery, an artisan food hall, is being built in the former Lakeland Brewing Co. facility on Lake Mirror. Owner Jon Bucklew recently told The Lakelander he and wife Sarah are planning a fall opening. There’s been no announcement yet of who will operate the brewery there.