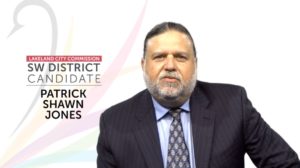 In preparation for the Jan. 15 City Commission special election, LkldNow sat down with each of the three candidates and asked them the same questions — some serious and some light-hearted. The idea is to give voters a chance to get to know each of the three candidates better. Here is a transcript of our interview with Patrick Shawn Jones. (All interviews edited for clarity.)

While the race is citywide, the winner will represent the Southwest District of the city.

Why do you want to be a city commissioner?

I really started thinking about the only way to create changes is to get in there and create the change yourself.

Well, it can’t be for the pay because I work for the radio station in Tampa. That’s volunteer and I’ve done that for like 15 years.

Do you have any specific proposals for economic development?

The biggest one I was pushing for was Gigabit Lakeland. And that’s still seems like that’s going to be a big development.
We need to retain our brightest and most educated people within the city. If we bring in those jobs that will help finance and keep them here.

When people around Florida hear “Lakeland,” they think…

They either think of swans or they think a backwoods people. Being born and raised here, I want to change that idea.

In four years, when people around Florida hear “Lakeland,” I want them to think…

When I want to show somebody what I like about Lakeland, I take them to…

People say city government needs to be more “customer-centric.” What one or two steps should be taken along those lines?

Well, that goes back with code enforcement. They need to be better trained. The thing to remember is we’re civil servants. We have over 2,300 employees with the city and each time when you talk to city employee, there needs to be a smile on their face.

100%. We need to work on that. Small business is the backbone of our society. That’s what makes or breaks us. If we’re not friendly to our small businesses, who else aren’t we friendly to?

How could the City Commission have better handled the Confederate monument issue?

I think they needed to address that probably more to the population and just figure out where they want to go with that.

Where are you most likely to be seen on a Saturday morning?

When I wake up at the crack of noon me and my husband we usually like going down to the flea market. We like finding a nice restaurant to eat at because that’s what we do.

What distinguishes you from the other two candidates?

What’s your assessment of the other two?

Bill is a great guitar player. I wish she (Roberts McCarley) was more engaged on our community.

When I go to a coffee shop or a bar, I order…

What question did you expect me to ask, and how did you plan to answer it?

I hoped you were going to ask was — “How can we how can we save money in the city?” The city did a wage study. A management advocacy advocacy group found about 125 people in upper management make over more than $100,000. In their study, they made the recommendation that they were a lot of those people were being overpaid by more than $19,000 a year and if you add that up that comes to $1.4 million that we’re overpaying certain special upper management.

The city Communications Department recorded interviews with all three candidates. Here’s the one with Patrick Shawn Jones:

Update: Jan 3, 2019 – Due to an editing error, a line was left off the question ” The biggest mistake made by city government in the last four years was …” it has been restored above.