Lakeland voters have a lot of questions about the strong mayor initiative on the Nov. 7, 2017, election ballot. Our aim here is to provide objective and understandable answers.

This is a living document that will be added to and updated regularly between now and Election Day.

What are we voting on?

The basic issue is: Are we going to change the form of city government in Lakeland to one in which the chief executive is a mayor elected by voters rather than a city manager appointed by city commissioners.

What do we have now?

The ballot proposal would change city government to a strong-mayor form in which voters directly elect a mayor as chief executive to run the city departments.

What’s with the “Yes People’s Mayor” and “No Boss Mayor” signs?

A lot of people have been asking about this, so I’ll give a short answer up high. Read on for more details.

The “Yes People’s Mayor” signs are put up by those who want a strong mayor, also known as an executive mayor.

The “No Boss Mayor” signs are put up by those who are against the strong-mayor initiative.

Who is proposing the change?

A group called Committee for a Strong Lakeland organized around the idea that a strong mayor would be more accountable to the voters and would be able to act more decisively than a seven-member commission.

Their website is here. (You might want to turn the volume down if you’re in a public place; as soon as you reach the site, a video plays with the audio turned on.) Their founding document is here.

The group is often represented in public forums by Matt Doster of Front Line Strategies, a Tallahassee political consulting firm.

How did the issue get on the ballot?

Committee for a Strong Lakeland held public meetings in 2015 and then drafted a city charter, which is essentially the constitution for the city of Lakeland. Essentially they took the existing charter and rewrote the appropriate parts.

Then they organized a petition drive and collected more than 6,038 signatures, which represents 10 percent of registered voters in the city. The Polk elections supervisor certified that the signatures were legitimate, which obligated the City Commission to put the issue on an election ballot.

The City Commission had control over the ballot wording (which involved much debate) and whether it would be on the Nov. 7 general election ballot or be voted on earlier than that.

What are the main selling points for a strong mayor system?

Committee for a Strong Lakeland argues a mayor elected by the public is more responsive and can act more quickly and decisively. An elected mayor would be able to set clear policy goals that would be outlined during election campaigns, the group says.

I thought Lakeland already has a mayor.

Is there organized opposition to the strong mayor proposal?

Yes. An organization called No Boss Mayor formed to oppose the ballot initiative.

Their website is here. Their founding document is here.

The group’s chairman is Larry Durrence, who was a city commissioner in the 1980s and is currently running for a City Commission seat. The group is often represented in public forums by former City Manager Gene Strickland, former City Attorney Joe Mawhinney, and former Mayor Gow Fields.

What are No Boss Mayor’s major objections to a strong mayor?

The group feels the current system works well and says the proposed charter gives too much power to one person while diminishing the power of the City Commission.

Aren’t there checks and balances?

The strong-mayor proponets say they built in several checks on power. For example, the City Commission passes the city budget. The proposed charter says they can investigate city departments and issue subpoenas. If popular support for the mayor wanes, a recall election can be held.

What will I see on the ballot?

Click to see the full sample ballot. Here’s the portion about the strong mayor: 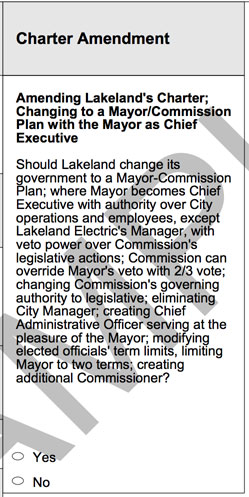 Why are the choices “Yes” and “No”? I thought I would see “People’s Mayor” and “No Boss Mayor.”

State law required that the issue be posed as a yes/no question. “Yes” means you want to change to a strong-mayor system. “No” means you don’t want that particular change.

Where can I see the proposed City Charter recommended by Committee for a Strong Lakeland?

Here. It’s a 22-page, single-space document full of legalese. The blue text represents additions to the current City Charter, and the red text represents content that would be removed.

When we vote for mayor (also on the Nov. 7 ballot), how do we know if the person we elect will be under strong mayor or the current format?

Good question. There is confusion, but both sides agree that the person elected will fill the role of strong mayor starting Jan. 1 if the issue passes. If it doesn’t pass, the role of mayor will remain as it is now. The four candidates for mayor say they are prepared for either role.

Strong-mayor proponents wanted to hold the vote on the new charter in August or September; one of the reasons was so voters and candidates would know which mayor position they’d be voting for in November. A 5-2 majority of city commissioners decided to hold the vote in November, saying turnout would be stronger then.

Who can vote? When and where?

Any registered voter whose registration lists an address within Lakeland city limits can vote in the election.

There are three ways to vote:

The ballot also includes the race for mayor and three city commission seats.

If you are not currently registered to vote, you’ve missed the cutoff date for this election, but you can register to vote in future elections. Get more info here.

The Committee for a Strong Lakeland took the “strong mayor” concept and started calling it “executive mayor” early on. As their campaign evolved, they morphed to the term “people’s mayor.” They are all terms that apply to the kind of mayor who is elected as the city’s chief executive. If that’s the system you favor, vote “yes.”

The group that supports the current system adopted the name “No Boss Mayor” as a warning against what it feels is too much concentrated power in an elected chief executive. (The strong-mayor advocates like to point out that it’s a name copied from similar campaigns in cities like Sarasota, Pensacola and San Diego.) If you want the form of government in Lakeland to stay the same, vote “no.”

Which organizations and individuals have endorsed Strong Lakeland?

Committee for a Strong Lakeland listed these endorsements in a recent news release:

Which organizations and individuals have endorsed No Boss Mayor?

We asked No Boss Mayor for a list of their top 10 endorsements. They listed:

Where is Strong Lakeland getting its financial support?

The organization has received $382,418 in contributions through the end of September. Almost all of it — $379,000 — came from Gregory Fancelli, a businessman with interests in development and historic preservation.

Where is No Boss Mayor getting its financial support?

The organization has received $73,173 in contributions through the end of September. The biggest donor is the International City/County Management Association, a trade organization, which has provided $29,500. The effort has also received $5,000 donations from four people or organizations affiliated with the Lakeland First political action committee and/or the Lakeland Economic Development Council.

How does the proposal affect Lakeland Electric?

Committee for a Strong Lakeland was sensitive to the role of Lakeland Electric in drafting their proposal, in part because they wanted to make it clear their effort had nothing to do with 2012 discussions about making it easier to sell the utility.

The proposed charter retains a current provision that makes it all but impossible to sell the utility. (It would take a vote of at least 65 percent of all of Lakeland’s registered voters to allow a sale.)

The proposed charter also puts the manager of Lakeland Electric under the City Commission instead of the mayor. No Boss mayor has used as one of its talking points that it’s impractical to separate on large and very important branch of city government from the rest of the departments.

What about term limits?

Term limits change under the charter proposal. Whether they become stronger or weaker is a matter of interpretation:

Only Tony knows. All four candidates for mayor have said they’d like to have him stay on as chief administrative officer, a new position created in the proposed charter. Delgado hasn’t said whether he’d accept the second-in-command job. If he were to accept, he would have to relinquish his membership in the International City/County Management Association, which could affect future job prospects.

How would the role of the City Commission change?

Currently city commissioners, by majority vote, set policies, pass laws, rule on land-use issues, set taxes/fees and pass a budget based on a document submitted by the city manager.

The mayor would be able to veto (overturn) acts of the commission or individual items within the budget. It would take a vote of at least 5-2 for the commission to override the mayor’s veto.

As mentioned elsewhere, the commission would also supervise the manager of Lakeland Electric.

No Boss Mayor representatives also point to the specter that the City Commission may find it necessary to hire its own financial expert(s) to keep tabs on the administration.

Strong Lakeland says the new salaries are small compared with the hundreds of thousands of dollars a mayor will be able to save if he or she quits hiring outside consultants.

Who would the city attorney report to?

What is the recourse if the public loses confidence in the mayor?

The main recourse would be electing a different mayor in the next election. State law also provides the possibility of a recall election, but that tool is rarely used in Florida.

Where can I review news coverage and debate videos?

Do you still have questions?

Send them to [email protected]. We’ll be updating this document.