A company working with the city of Lakeland is hoping to win a competitive grant to build a low-income housing complex on East Bella Vista Street just south of Tigertown. But first it had to get chosen by city commissioners against another company with considerable affordable-housing experience.

Two companies, each with considerable experience building and managing low-income housing complexes, put in bids to develop a 2.83-acre, city-owned parcel into an apartment complex of at least 80 units to serve working families.

Although the details varied, both companies met the grant application criteria that at least 55 percent of the tenants would have low incomes and at least 6 percent very low incomes. 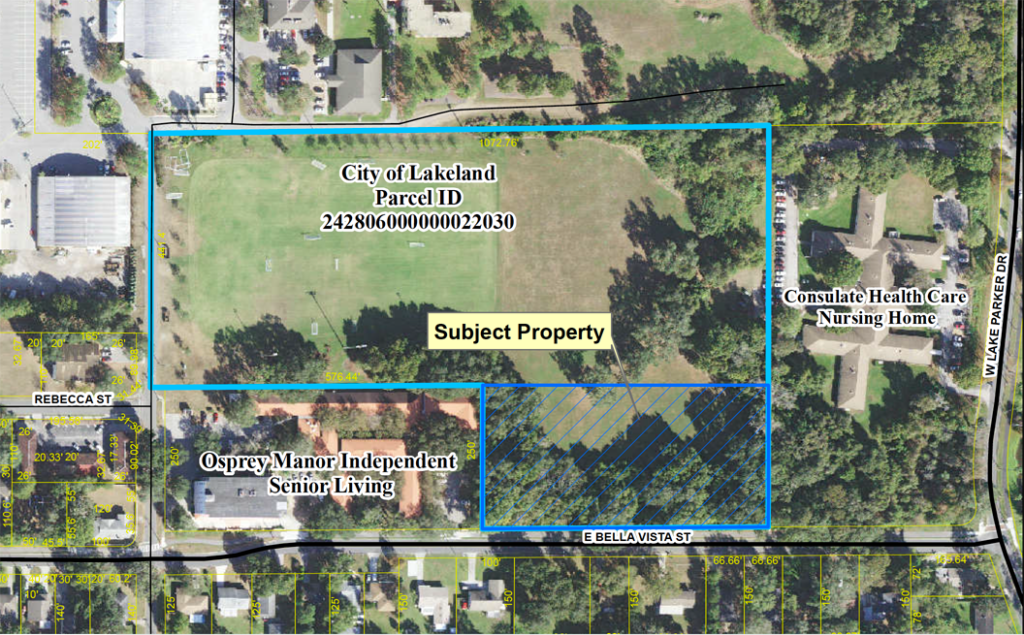 After lengthy discussions during the City Commission’s agenda study meeting last Friday and during Thursday’s regular meeting, which had been rescheduled because of the threat of Hurricane Dorian, commissioners directed city staff to work out a 50-year lease agreement with Fort Lauderdale-based Green Mills Group.

Terms of the lease are to include several items that the losing bidder, Blue Sky Communities of Tampa, had specified in its bid: a minimum of 86 units, at least 14 of which would be designated for very-low-income tenants, and amenities that would include a playground and fitness center.

View both companies’ bids at the end of this article.

A lease agreement must be signed at the next commission meeting on Sept. 16 to meet a Sept. 17 application deadline to the Florida Housing Finance Corp. That agency is administering federal Community Development Block Grants-Disaster Recovery funds related to Hurricane Irma for workforce housing.

Teresa Maio, the city planning manager, told commissioners that Lakeland is in a good position to win the grant because the project would be built on a city-owned parcel.

Property management experience is important, Maio said, because the grant requires the apartments remain low-income units for at least 99 years and there be an array of services including after-school programs, job counseling and financial counseling.

The vote in favor of Green Mills was 5-1 with Commissioner Bill Read absent.

Mayor Bill Mutz said that he favored Blue Sky’s bid because it made an upfront commitment to provide 86 units rather than the minimum 80 and to provide 14 very low income housing units.

“I am sure Green Mills would meet that. Both these are great corporations. But to me the upfront commitment” from Blue Sky makes the difference, Mutz said.

Blue Sky Communities’ proposal included a five-story building of 86 units, with 27 one-bedroom, 49 two-bedroom and 10 three-bedroom units. Among those, 14 would be reserved for very-low-income tenants, 47 for low-income tenants and 25 for moderate-income tenants. Blue Sky’s proposed amenities included a management office, playground area, fitness center, laundry room on each floor and view of a landscaped stormwater lake.

Winning bidder Green Mills proposed building Parker Pointe as a four-story building of at least 80 units with 28 of those one-bedroom, 44 two-bedroom, and 8 three-bedroom units. It proposed four units be reserved for very-low-income tenants, the minimum allowed under the bidding process, and the remaining 76 be for a mixture of low- and moderate-income tenants. Green Mills listed amenities as a community center and a patio.

Green Mills co-founder and co-principal Oscar Sol said that Green Mills “has no problem” with providing the commission’s requested 86 units, 14 of which would be very low income, and with providing specific amenities.

“This funding is highly, highly competitive,” Sol said. “It is basically a race for who can provide more units for the least amount of money. You don’t want to put all your cards on the table in a public setting. It is easy for a competitor on a different project in another area to say you are going to do 80 units; I am going to do 81.”

Green Mills would work to provide the maximum number of units possible for the least cost and still provide a livable space with amenities people want, Sol said.

“We are creating a place where families want to live. It is not always advisable to go to the maximum number of units,”  he said.

Sol pointed to the work Green Mills has done in Lakeland including the recently completed 96-unit Aida Palms (just north of the Lakeland Hills Post Office), which is reserved for families earning 60 percent or less of the area median income; the pre-construction work on the 80-unit Midtown Lofts, an affordable housing community to be built on Parker Street in cooperation with the Lakeland Community Redevelopment Agency; and the winning of housing tax credit funds to build Auburn Village, a 102-unit affordable housing complex for seniors.

Shawn Wilson, president of Blue Sky, Communities, defended his company’s site plan as well integrated into the community and its property management arm, Carteret, as a well-established firm dating back to 1971.