A 50-year lease agreement for Amazon Services Inc.‘s planned jet cargo operation at Lakeland Linder International Airport won the City Commission’s unanimous approval Monday afternoon, but not before commissioners fielded skeptical questions and asked a few of their own.

The online retail giant’s project is expected to create 800 to 1,000 jobs at the cargo-sorting center, the largest of its kind in the Southeast, he said.

Amazon and airport officials are working toward a July 2020 opening with construction starting this July.

Two residents raised issues during the public comments portion of the discussion and another resident praised city officials for securing the deal.

Chuck Barmby, city transportation planner, said the impact is expected to be to the west with access and egress to the Amazon facility off Drane Field and Kidron Roads and heavier movement toward County Line Road. Amazon already operates a million-square-foot fulfillment center on County Line Road. 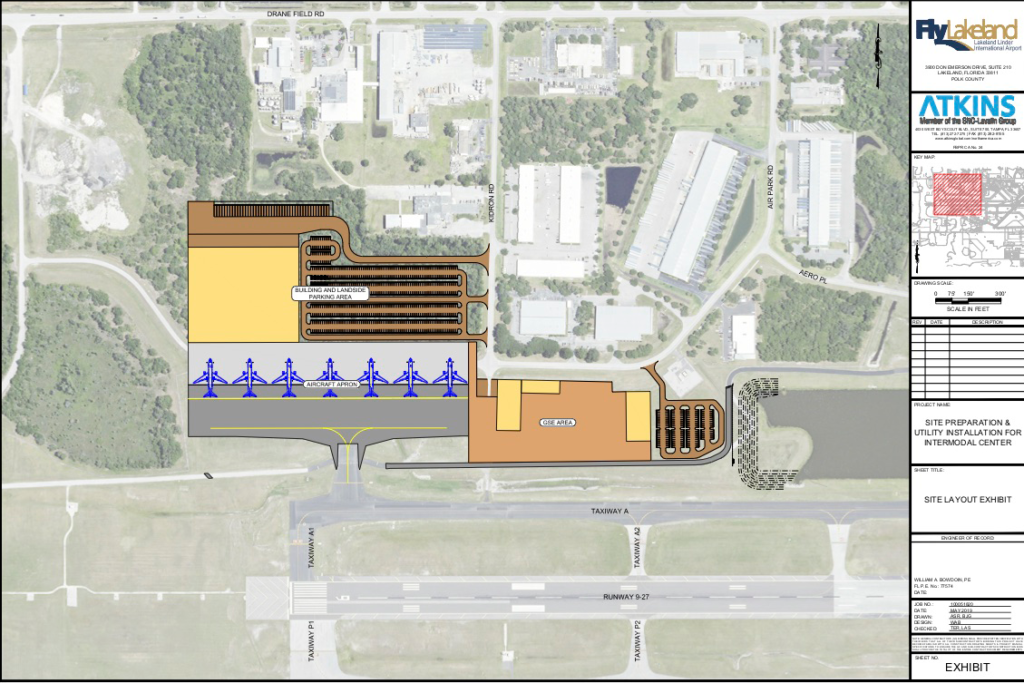 Barmby acknowledged the issues Smith raised about traffic on Pipkin Road and surrounding areas, intensified by recent growth at the nearby Publix and Geico complexes. He discussed road projects planned for construction in 2020 through 2023 to relieve congestion there and along the Drane Field Road corridor.

Julie Fancelli, a daughter of Publix founder George Jenkins, questioned the suddenness of the lease action, only three days after the announcement;  she asked how many of the expected 1,000 jobs will be here in five years as robotics continue to impact the distribution industry and questioned what will happen to the sky over the quiet city.

Conrad said that although Amazon required secrecy to protect it from competition until the lease agreement was signed, the airport started planning in 2011 for a major cargo operation or a jet maintenance operation center on the site. The cargo center concept has long been in the master plan and has been the topic at numerous public meetings and discussed in news articles, he said. The details are different from the basic plan, adjusted to fit Amazon’s needs, he said.

Conrad did not have an answer as to how long the 800 to 1,000 jobs will be here other than to say the facility is being designed to the current state of technology for robotics.

Amazon will bring eight to 10 cargo jets a day into and out of the airport under the current plan, Conrad said. Even with Amazon’s potential expansion, Lakeland Linder will never become a cargo hub with hundreds of jets because it does not have the space or capacity, he said.

The jets will not be as loud as some of the aircraft currently in use at the airport, he said. When airport staff receives noise complaints now it is not about the large jets coming and leaving, he said, but about craft, whether small planes such as Cessnas or large aircraft, flying racetrack patterns six times an hour over the airport. The Amazon jets will fly in, load or unload and leave, straight in and straight out, he said.

The 50-year lease includes an initial 20-year agreement with options to extend at 10-year intervals for the remaining three decades. The lease payment will amount to $967,812 a year on 47 acres with the amount subject to resetting in five years.

Amazon will have an option to lease the adjoining 62 acres to the west and payments for that parcel will be negotiated when that option is taken.

In addition Amazon will pay landing fees of 85 cents per 1,000 pounds of cargo and will pay fuel pump fees with a 3 cent surcharge on each gallon.

To Commissioner Bill Read’s question of what will happen if Amazon shuts down its operation before the end of its lease. City Attorney Tim McCausland said that the buildings will become airport property, which is the same terms as lease agreements with other businesses at the airport.

However, the lease payments, landing fees and fuel surcharge fees will enable the airport to make needed improvements on older airport buildings and infrastructure, he said.

Even before Fancelli’s questioning the secrecy of the project, Commissioner Stephanie Madden had asked airport officials to explain why it could not be discussed in public and why the public did not have an opportunity to participate.

“I think it is important to let the public know that there are deals that would never happen” if public officials did not protect companies’ strategic plans, she said.

Commissioner Troller asked how much most of the jobs are expected to pay.

Amazon pays $15 an hour plus full benefits for beginning warehouse employees, Conrad said, adding that the operation will be a sorting center, not a fulfillment center such as the other Amazon facility in Lakeland.

Employees who are not new hires likely will make more, he said.

Amazon has requested payment of state and local incentives for bringing in 75 jobs that will pay at least 115 percent above the median income level. The total incentives, of $3,000 per job, will add up to about $225,000.

The annual average wage for those new jobs will be $47,204, according to a city resolution pledging to pay 10 percent of the incentive package.

Conrad said that when fully operational, the Amazon facility is expected to double the airport’s economic impact on the community, bringing it up to $1 billion a year.

(The Prime Air Boeing 767-300F photo used here and on LkldNow’s Facebook page was taken by Nathan Coats of Seattle and used under Creative Commons licensing.)