A cute bungalow on Dixieland Mall Lane, a little alley west of Florida Avenue, became a restaurant a few years ago when Fat Maggie’s moved in and served the best broccoli au gratin. Then it was Crane’s Crossing at the Gardens for a brief while. Now it’s home to D’Lucas, a new restaurant opened in May by Chef Marcos Fernandez, who also owns Nineteen 61 three blocks away.

He’s promoting D’Lucas as high-end fast casual (“It’s comparable to a Chipotle but with a quality local brand,” he told The Ledger) and locally sustainable (“We believe in fostering relationships with local farmers who share our values and practice sustainable agriculture,” the restaurant website states.)

Editor’s Note: Karyn Johnson is a mom and a paralegal who has lived in Lakeland since she was 3. For 15 years before she started in the legal field, she learned the ins and outs of the restaurant business as a server at restaurants ranging from diners to fine dining. She’ll occasionally share her perspectives on local restaurants at LkldNow.com.

On a recent visit, we turned the corner from Patterson Street and into the parking lot by the little alley, and I saw the quaint A-Frame painted a bright white and bold, black trim to contrast. The two front windows are painted a bright orange. The menu is positioned on the wall to the left of the windows in the same artistic style as on their website. To the left of the menu, “COMER PARA VIVIR” (Spanish for “EAT TO LIVE”) is splattered in the bright orange paint on a black background. The vibrant facade makes it hard to miss once you enter the lane. 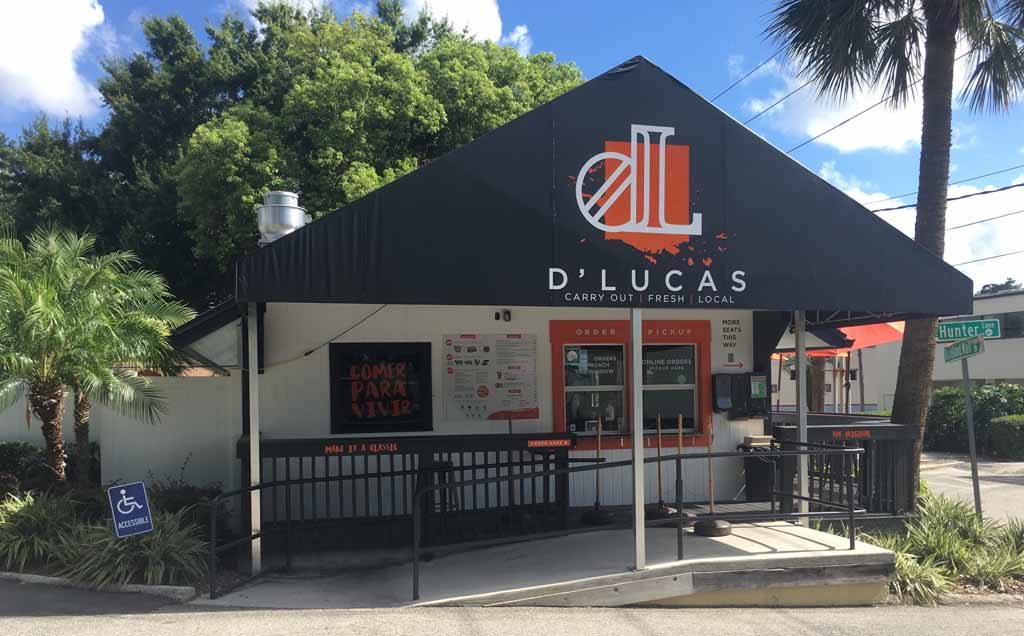 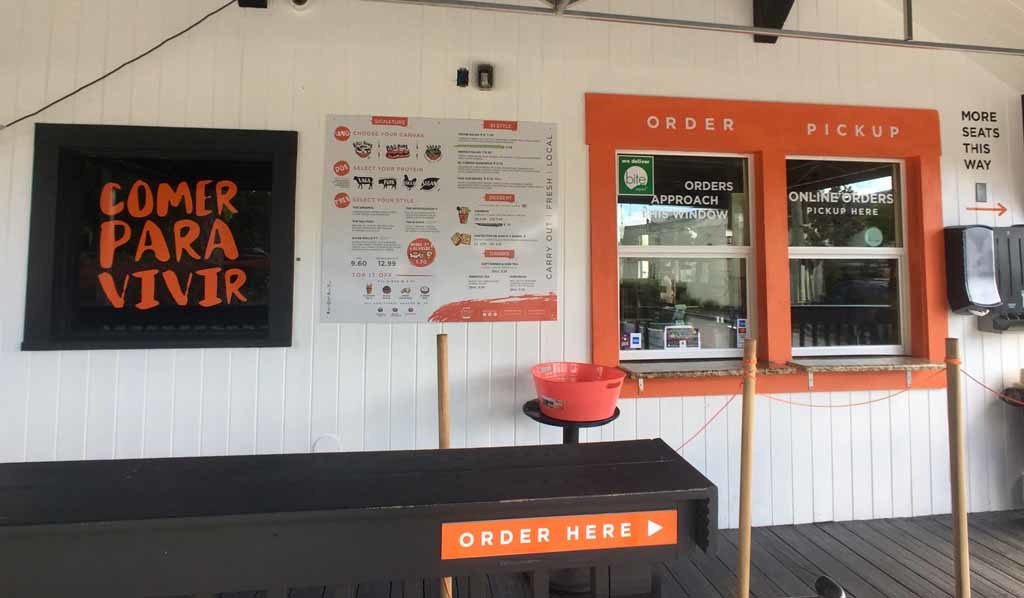 The menu itself is brilliantly designed on a white canvas with black and orange writing and cartoon-like pictures of Bao Buns, and a rice bowl … Stop, wait, what the heck are Bao Buns?

I found via Google that Bao Buns (are first and foremost fun to say!) originated in China in the third century. They are like an American leavened bread dough, using yeast, white flour, baking powder, fat like lard or cream or canola oil, and a little sugar. The difference is they are steamed instead of baked. This results in a fluffy, pillowy, slightly sweet dough that is still very white and strangely not raw tasting. That is the best description I can come up with. It is a new favorite for me and maybe I can figure out how to make them at home…

Back to the menu – on the left side is an orange block with white writing, “WHAT IS VACA?” Stop again… What IS vaca? “Spanish for cow, Vaca is our perfect blend of slow braised brisket and short ribs.” Ok, yes please. At the time I was still in the dark as to what Bao Buns were, but I am a risk taker so I went ahead and ordered it. After picking the rice bowl or bao buns or salad, step two is to choose a style. I got “The Original” and my bao buns were generously filled with Vaca, black beans, caramelized onions, topped with whole sprigs of cilantro, and a lime wedge on the side. 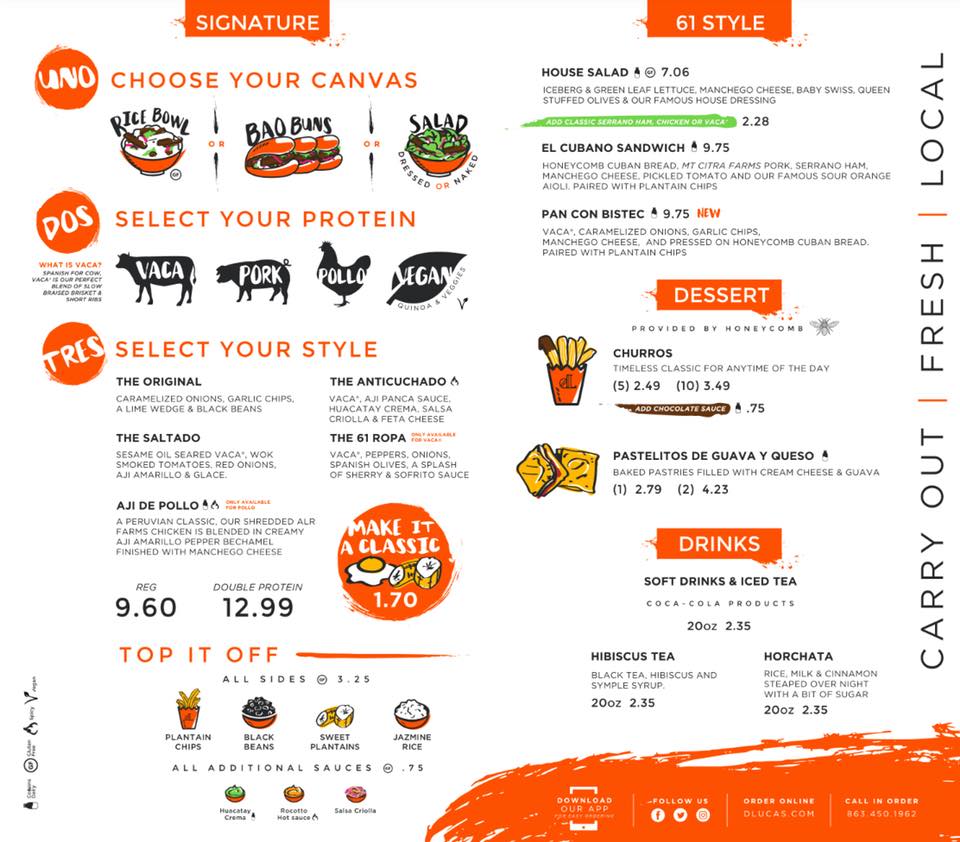 Along with The Original, there are four other styles to build on the canvas of rice or salad or bao buns. I also tried “The Saltado – Sesame oil seared Vaca, wok-smoked tomatoes, red onions, aji amarillo & glace. Topped with plantain chips.” I feel like the description is there to test your romantic side … how can you not be intrigued by that description? With a drop-the-mic ending like, “Topped with plantain chips.” Boom. The sesame oil and the bursting tomatoes pair well with the sweet heat from the peppers. The plantain chips on top bring a crunch that rounds out the dish nicely.

The other side of the menu tells of a house salad, and an “El Cubano Sandwich”. Here the chef puts a unique twist on the classic Miami Cuban – using Manchego cheese instead of swiss, pickled tomatoes, and self-proclaimed “famous” sour orange aioli instead of mayonnaise and mustard. The Cuban bread is made from a local baker, Benjamin Vickers, who partnered with Chef Fernandez to build a bakery (“Honeycomb”) that produces breads, pastries, and the like.

The result? A sweet and savory medley of Latin America. The pork is shredded, holding a slight crisp on the edges, the Serrano ham was rich in flavor with a hint of sweetness, and the sour orange aioli adds a nice balance to the sweet, pressed bread. A brown lunch bag of “Garlic Chips” were served with the order. The garlic chips were plantains shaved long-ways, fried into a loose curl, and salted with garlic and a hint of lime.

The dessert menu has the always delicious Churros, with the option to add chocolate sauce for a small up-charge. They also have Pastelitos Guava y Queso, or Guava and Cheese Pastries. These are synonymous with Latin desserts, particularly Cuban. They are flaky and generously filled with just enough tang from the cheese to go with the sweet guava.

Just below the desserts is the drink menu, and there are two interesting choices after the Coke and water: HIbiscus Sweet Tea is the first option, and it tastes almost like black cherry Kool Aid. The tea flavor sits in the background and keeps its earthy tone but the sweet additions give it a fruity, almost refreshing taste. The second choice is a Horchata, the Latin American version of course, made with rice milk (rice soaked in water then strained through a sieve), cinnamon, and sugar.

We arrived at 1:15, and waited behind about 15 people for about 25 minutes before we were at the counter. It then took another 10 to 15 minutes to get our food. My Cuban was the last Cuban of the day and the woman behind me was not too happy to hear that. Another couple came up to the counter while we were waiting for the food to return a rice bowl that was just “too salty.” The patron said she was sorry but she couldn’t eat it. A gentleman took over the register and happily refunded their money. I asked the cashier how long they had been open and she said a couple of months.

Fernandez acknowledged on Facebook two weeks ago that there have been problems in the opening weeks and said his team has implemented changes in an attempt to fill orders more quickly.

(Editor’s note: I used the restaurant’s app — iPhones | Androids — to order on Saturday night. The transaction went smoothly after I entered my credit card info and my meal was ready in around 10 minutes.}

Praise for the restaurant has included a review from The Ledger’s Eric Pera that awarded 4 ½ stars for the food and three stars each for service and ambience..

I hope they can get their kinks worked out so they can truly be a local, good-for-you, fast food eatery. The food is above and beyond any Chipotle I’ve ever had. If Chef Marcos can figure out a way to deliver the food as quick as a Chipotle, I have no doubt he will succeed. Lakeland is ready for such an eatery that offers quick, good, local food.