Before a divided City Commission voted 4-3 today to proceed with plans to convert part of New York Avenue downtown into a two-way bicycle path, the project was endorsed by two people who said they were skeptical initially.

One was Commissioner Stephanie Madden, who joined the majority in agreeing to hire Florida Safety Contractors of Thonotosassa for the $661,000 project involving three little-used blocks between Lime Street and Main Street.

Under the project, the southbound lanes of New York Avenue will be turned into a two-way bike path separated by a physical barrier from the remaining lane, which will carry northbound motor traffic. In addition, New York Avenue will be upgraded through landscaping and streetscaping. The state Department of Transportation is paying nearly three-quarters of the cost, with the city paying the rest.

Madden thanked city transportation planner Chuck Barmby for his patient explanations that the three-block “bicycle track” will act as a connector between major segments planned for the city’s Lake-to-Lake Bikeway. Some of the planned additions to the network of bike trails include a bike-friendly, wide sidewalk along the west side of Lake Hunter and a rail overpass leading to Lake Wire.

Mary Crowe, president of the advocacy group Bicycling in Lakeland, picked up on the theme of connectivity. She told commissioners she “wasn’t as keen” on the idea a year ago. She expressed doubts about the bike track last October when she led candidates for elective office on a bicycle tour of Lakeland.

(Two of the three commissioners who voted against the plan today rode on that tour: Michael Dunn and Scott Franklin. Bill Read joined them in opposition.)

Three things led her to change her mind about the utility of a bike connector in the western portion of downtown, Crowe told commissioners: 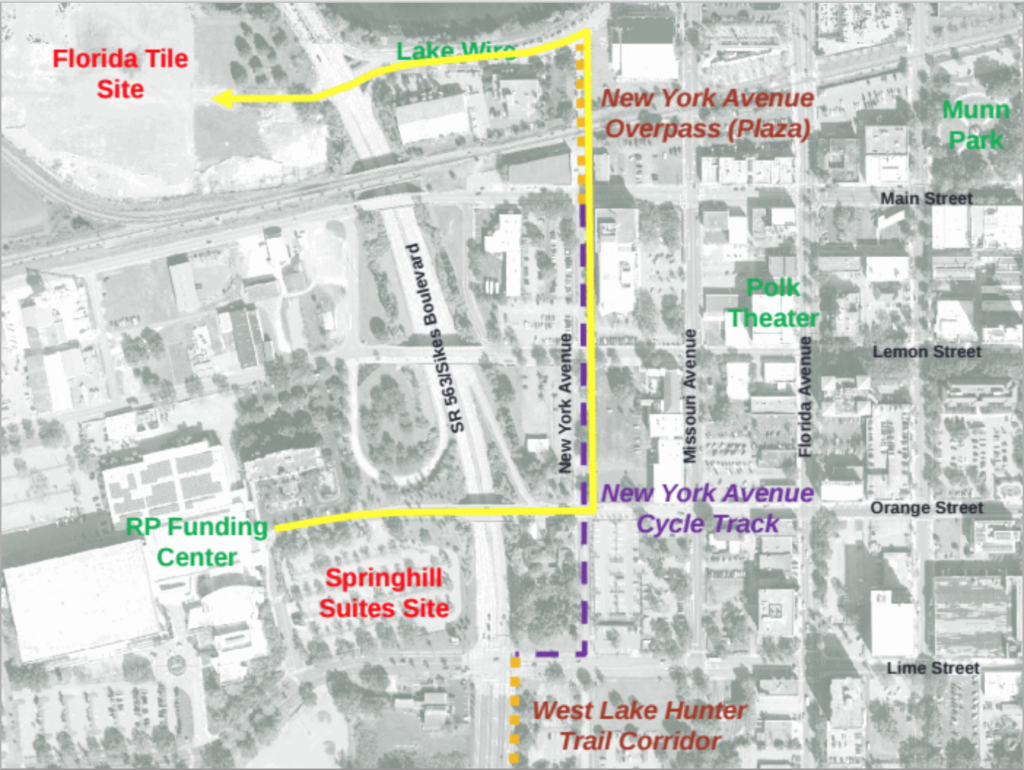 Commissioners Dunn and Franklin said they oppose the bike path because of cost and a fear it would get little use. They also questioned the utility of a planned overpass taking New York Avenue bike riders and pedestrians over CSX railroad tracks near Lake Wire. The project is projected to cost $3.5 million to $4 million, paid by state transportation funds.

Franklin said most cycling enthusiasts traveling north on Harden Boulevard would be more likely to continue north of Lime Street on the roadway rather than having to detour to New York Avenue and ride up a ramp to get over the railroad tracks.

But Crowe contrasted families who would opt for the safety of a bike path with enthusiasts who don’t mind riding on busy streets.

And Barmby said the overpass will alleviate delays as railroad traffic increases from an average of 20 trains per day in 2016 to an anticipated 27 a day by 2030.

The delay explanation didn’t satisfy Dunn, who commented, “Vehicular traffic, which is what we have the predominance of, runs the economy. It seems that we’re putting the needs of some folks on foot or on bicycle ahead of those that are actually driving vehicles, so we’re worried about their delay, yet the piles of cars that will be waiting up for a train, we don’t seem to be as concerned about that delay.”

The issue drew one other speaker to today’s meeting. Jim Berg said the closing of New York Avenue to southbound traffic will force heavy trucks onto Missouri Avenue, where they will become a danger to parishioners coming to St. Joseph’s Catholic Church as well as people lined up along Missouri for the church’s food pantry.

Commissioner Phillip Walker said he remains a supporter of the bike track because it “provides connectivity.” And Madden said she has gone from skeptic to enthusiastic supporter after seeing how cities she enjoys visiting like Greenville, S.C., and Atlanta have increased livability by carving out bicycle-friendly corridors.

The project is scheduled to be completed in 2020, we reported when the commission voted 5-2 in February to proceed with the project after another lengthy discussion.

City Commision Meeting from City of Lakeland on Vimeo.

Postscript: Bicycling in Lakeland is holding another bike tour of Lakeland for local candidates. It leaves 5:30 p.m. Friday from the Wells Fargo parking lot at Main Street and Tennessee Avenue.