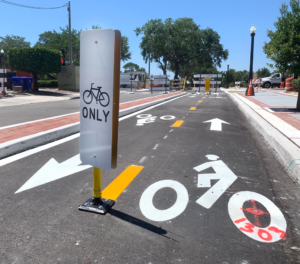 Downtown Lakeland’s New York Avenue bicycle path is nearing completion. A few improvements are being made prior to the final inspection, which is expected to take place next month, Lakeland Public Works Director Heath Frederick said.

The three-block path between Lime and Main Streets is formally called a “bicycle track,” but it’s more of a connector that will take cyclists between a future trail along the west side of Lake Hunter and the planned over-the-railroad pedestrian bridge that will connect New York Avenue with Lake Wire.

The bulk of funding for the $661,000 project comes from the Florida Department of Transportation. When it is completed, the newly streetscaped New York Avenue will have a northbound lane for vehicle traffic separated by a small barrier from a two-way bicycle path in the former southbound lane.