Food Truck Park Readies for a May 9 Groundbreaking

The Yard on Mass food-truck park and beer hall easily jumped a hurdle this morning on its way to an expected May 9 groundbreaking and fall opening.

Two churches near the site at North Massachusetts Avenue and Parker Street sent no representatives to object, so the Lakeland Board of Adjustments and Appeals quickly approved an alcohol variance at a special meeting.

The city’s Land Development Code requires at least 500 feet distance between houses of worship and establishments serving alcohol. The alcohol-serving area planned at The Yard on Mass would be 221 feet from the main door of Parker Street Ministries and 269 feet from the door of Iglesia Samaria Evangelica.

Parker Street Ministries is a historic church dating back to 1900, while Iglesia Samaria  Evangelica is a newer church operating out of a storefront.

This city’s Midtown Community Redevelopment Agency owns the 1.18-acre parcel at 802 N. Massachusetts Ave. and already has signed a lease with Project Redfish, the group developing the food truck project. The property was formerly a used-car lot and sits next to the CRA’s Mass Market/Haus 820 mixed-use development. 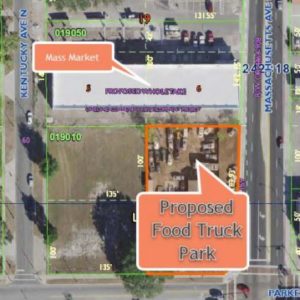 Alis Drumgo, interim manager of the CRA, said, the CRA staff is “hoping this is the beginning of a ton of work along Parker Street going east and west over to the Lake Wire neighborhood.”

The CRA collects taxes in specific districts that are labeled as blighted and directs the proceeds toward redevelopment.

Drumgo said the CRA bought the parcel about a year and a half ago and demolished the old office/garage building to clear the way for the food truck project.

“We at the CRA try to mitigate blight,” Drumgo said. “We have already touched three of the four corners” at Massachusetts and Parker, working with Parker Street Ministries on one project, renovating a building for Crystal’s School of Dance and providing a grant to assist NuJak Development in renovating its office.

And Craig Morby, one of the managing partners of Project Redfish, described its Yard on Mass venue as “another cog in the development of the Midtown CRA,” citing the neighboring Mass Market and Haus 820, CRA projects immediately to the north along Massachusetts Avenue.

Morby said, “We seek to be a multi-cultural and, mullti-generational. We will be very kid friendly and dog friendly. We plan to have live music, kids’ events, yoga and a plethora of other events.”

The taproom will not include a brewery, rather will work with regional craft beer brewers to sell their products on tap, he said.

The Yard on Mass will not be a restaurant but will provide electrical hookups for up to four food trucks.

Jenn Batts, another of the partners that also includes her husband Joel Batts and Matt Patrick, said, “We are not going to be a last-stop-of-the-evening place. Our hours will be 11 to 10 most nights and 11 to 9 on Sundays. While we will serve liquor, it is craft cocktails that are premixed, six specific cocktails that we will have for that season. It is not a crazy bar scene; there will be yard games and popup events and popup shops.”

Morby said groundbreaking will be May 9 on the 2,600 square-foot building to house the tap room and restrooms in anticipation of opening by late September.

Drumgo said the CRA is developing an 81-space fenced parking lot to serve both The Yard on Mass and neighboring Haus 820.

Several street parking spots will be reserved for Uber or Lyft pull-ups for easy access for patrons not driving home, Morby said.

Phillip Scearce with the city’s Community and Economic Development Department recommended the board approve the variance, noting that with the CRA owning the parcel, the project “will be subject to significant oversight.”

“The project will bring substantial economic development benefits to an area that has long suffered from disinvestment and is a key component of the CRA’s redevelopment vision,” Scearce’s report said.

After asking questions about pedestrian safety and the impact on the nearby Talbot House Ministries, the volunteer board voted 5-0 to approve the variance.


Zoning Board of Adjustments & Appeals Special Meeting 2019.04.18 from City of Lakeland on Vimeo.