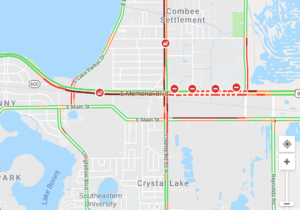 A fatal accident involving a motorcycle and three vehicles has East Memorial Boulevard shut down from Combee Road to Fish Hatchery Road until at least 7:30 p.m., the Polk Sheriff’s Department reports.

A westbound motorcyclist, whose identity has not been released yet, died after hitting the side of one vehicle, striking the rear of a truck and then going into the path of a third vehicle, the Sheriff’s Office said. No other injuries were reported.