For 18-year-old Emily Dunson, philanthropy is a family heritage. “My grandmothers were big philanthropists in their community and it’s been a family tradition,” she said this morning after winning the Youth in Philanthropy Award from the Greater Polk Chapter of the Association of Fundraising Professionals.

“Giving back and helping out and that’s been a big part of who we are. We’re Christians, so we believe in following in the footsteps of God and make a positive impact on the community,” said Dunson, a senior at Harrison Arts Center.

Dunson received the award at a breakfast at Southeastern University sponsored by AFP and presented by the GiveWell Community Foundation. 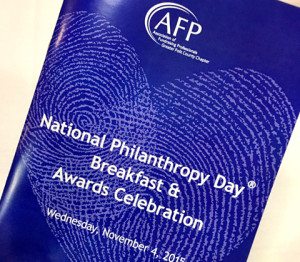 The event, held on National Philanthropy Day, featured several awards to individuals and organizations who donate time and money to local causes:

Dunson was nominated for the award by InnerAct Alliance, a substance-abuse prevention organization. As president of UthMPact, the organization’s youth arm, Dunson coordinated Project Prom, which provides donated formalware to students who can’t afford it and who take a sobriety vow.

Daryl Ward, principal of Harrison Arts Center and the event’s master of ceremonies, had similar praise for Dunson.

“She’s mission-oriented. She’s not volunteering just so she can check something off on her resume. She really believes in helping others,” Ward said. He added that Dunson has been a proactive leader who, for example, called him during the summer break in her role as president of the school’s Arts Council, to discuss ways to improve student communication.

Dunson is a creative writing student at Harrison. She says she favors poetry and is thinking about majoring in international business when she goes to college. At school, she’s vice president of the Lakeland High School Keyettes, for whom she designed T-shirts to raise money for breast cancer awareness.

She also volunteers at the Angel Care Center of Eloise and has participated in mission trips.

Her reaction to this morning’s award? “I am completely humbled. I love what I do and it’s not something I ever feel obligated to do. I love UthMpact and InnerAct Alliance. I definitely have a passion for helping others.”

That passion, she said, was driven by the examples of her late grandmothers, Jill Dunson, who volunteered with numerous organizations, and Ann Thayer, whose voluntteer work led to a Point of Light Award by President George Bush.

Her parents are Les and Ginny Dunson of Winter Haven. Les Dunson is president of Dunson Harvesting Inc. of Lake Alfred, a citrus management business, and past president of the Polk County Farm Bureau.