Sixty percent of Lakeland Electric’s residential customers are subsidizing the other 40 percent, a member of the city’s Utility Committee contends. Those 60 percent are the customers who live outside city limits, and Joe Childs, their one official representative on the 13-member committee, pushed unsuccessfully for a plan to bring more equity in billing when the committee met today.

While other committee members expressed sympathy with Childs’ position, he was outvoted 10-1 on a motion to maintain the current billing structure.

The main issue for committee members: Changes to the billing structure would reduce electric bills a few dollars a month for residential customers outside the city limits, but increase bills several dollars for customers inside the city.

On top of that, the committee is contemplating a 3 percent raise in electric rates for next year, so members see a giant public relations obstacle if they add yet another bill increase for some customers.

“I don’t want to compound one increase with another increase,” City Commissioner Justin Troller said.

The seven members of the Lakeland City Commission comprise a majority of the Utility Committee. They appoint the other six members, who represent various rate classes (commercial, industrial, residential.) While two of the four members who represent residential customers live outside city limits, only Childs’ position officially represents those bill payers.

It’s the county tax that causes outside-city-limits bills to be higher, some city commissioners said, and a chart prepared by Lakeland Electric illustrates their point: 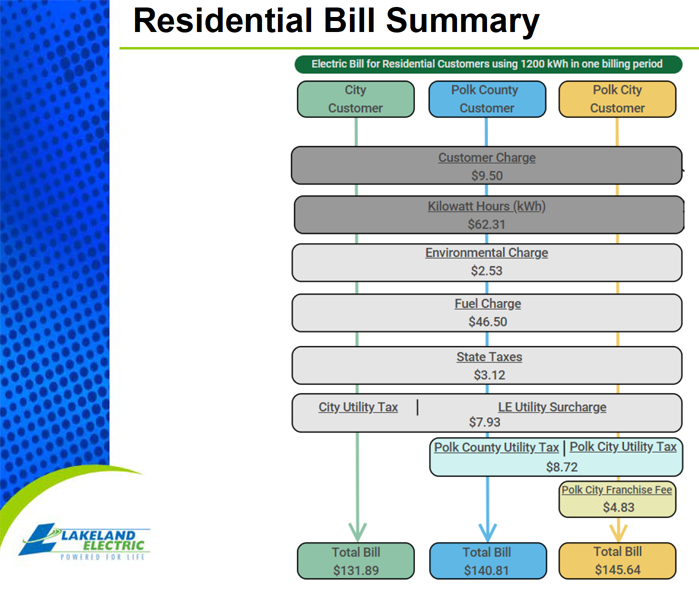 But Childs says the city utility tax and the “LE Utility Surcharge” should not be shown on the same line because they don’t pay for the same thing. Instead, he said the committee should look at where the money goes, as shown in this chart, a collaboration between Childs and the Lakeland Electric staff: 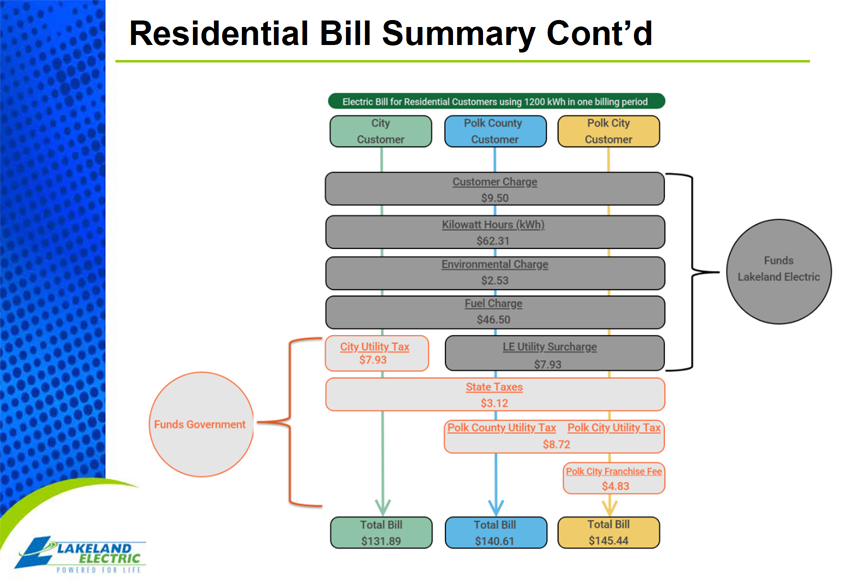 From that perspective, non-city residents are carrying an unfair burden in the amount they pay to support utility operations, Childs says: “You need a business reason to justify the surcharge and can’t treat similar classes of customers differently.”

Instead, Childs proposed rolling the surcharge into the base rate paid by all customers, as illustrated here: 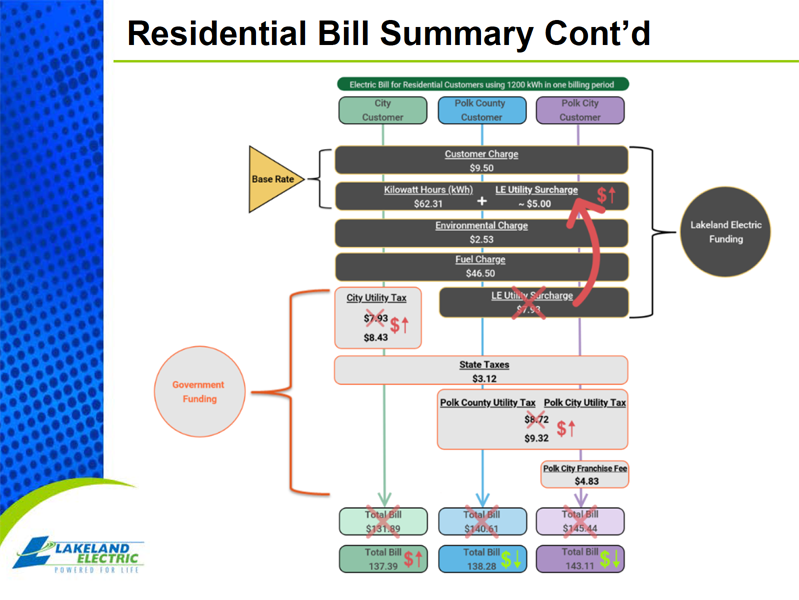 Under that scenario, the utility taxes paid to the city and county rise slightly because the base rate increases, and the total bills paid inside and outside the city are closer to equal.

But the bottom line looks different to payers inside and outside the city. For a “typical” customer using 1,200 kWh per month, the total bill:

The total revenue to the city would be unchanged, Lakeland Electric General Manager Joel Ivy said.

Last fall, Ivy suggested the committee consider moving both the surcharge paid by out-of-city customers and the city utility tax into the base rate.

But he said today that he discovered that idea wouldn’t work because the state requires the utility tax to be shown as a separate line item on customers’ bills.

His recommendation to the committee today: Don’t change the fee structure. “If we can’t move both the utility tax and the surcharge in the base rate, I don’t feel that it’s a viable option to take any action,” he told the committee.

Ivy said today the utility plans one change on bills for customers outside of city limits: The line for the surcharge will start showing as “Electric Surcharge” instead of “Florida Public Service Surcharge.”

An analysis of the proposed change by Lakeland Electric outlined pros and cons:

Ivy told committee members today that the utility’s spending on new lines and equipment is proportional. “We tend to spend a little more on infrastructure outside the city limits.

In addition, he said there is no difference in how Lakeland Electric responds to outages or customer service requests between city and non-city areas: “We don’t check where you’re from when you call us.”