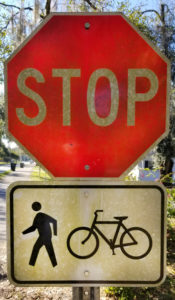 The 2019 Dangerous By Design report was released yesterday, and Lakeland was listed as the fifth most dangerous American metro area for pedestrians during the years 2008 to 2017.

That didn’t come as a shock to Lakeland city planners and transportation officials as the metro area finished sixth in the 2016 report. Chuck Barmby, the city of Lakeland transportation & development review manager, said that when the 2016 report was released the state was “already in the process of doing safety audits, neighborhood mobility audits, and major intensive funding efforts that led toward investments in bike and ped infrastructure.” He added that the report helped focus the state toward getting those investments in place as quickly as possible.

Barmby noted that the state studied the city from Memorial Boulevard north to Interstate 4 and recommended projects out of that study. He added that in 2016 city staff walked Memorial Boulevard, Kathleen Road, Lakeland Hills Boulevard, and U.S. 98 to look at the streets from the view of the pedestrian.

Angelo Rao, manager of traffic operations and parking for Lakeland, believes that Memorial Boulevard is Lakeland’s No. 1 problem spot for pedestrians. “And it is being addressed next month with DOT’s construction of safety improvements to Memorial Boulevard,” Rao said.

Rao said the state is adding HAWK traffic signals to Memorial between Lincoln and Lakeshore at four spots that were identified to have significant pedestrian mid-block crossings. They are flashing lights that look like traffic signals that span the street mid-block and are activated by pedestrians. They will flash amber to warn drivers that pedestrians wish to cross, then go red to signal the drivers to stop, then flash red to allow drivers to continue after a stop if the pedestrian has finished crossing the road.

One of the solutions to come out of the team was “Lead Pedestrian Intervals” – five-seconds where all lights are red to give pedestrians a chance to enter the crosswalk with all traffic stopped. Rao said the city added the interval to 26 intersections and the data showed that vehicle crashes to pedestrians or bicyclists were reduced. “We didn’t realize this until we looked at the numbers, but it has seemed to reduce vehicle-to-vehicle injury crashes as well,” Rao said. “It is interesting to have these relatively inexpensive projects be so effective,” Rao added.

Barmby said that U.S. 98 between Griffin Road and Interstate 4 is a major problem spot for the city: ‘It’s a combination of factors: cars going too fast, the road is too wide, and at night people going back and forth. Some are at the intersection and some aren’t and when a mistake is made by one party or the other it is a disastrous result.”

Barmby said the city’s efforts there is two-fold: to get pedestrians to cross at signals or to stop at refuge spots in the median, and to use visual clues to get drivers coming off the interstate to realize they are entering an urban area.

A city project undertaken to improve pedestrian safety was the addition of painted parking spots on Lake Morton Drive to give drivers visual clues about the lanes and to reduce the speed limit by 5 mph. Studies have shown that pedestrian deaths increase five-fold for those hit at 30 mph versus 20 mph.

Barmby said the state is also addressing pedestrian needs this summer with a new $2 million sidewalk on the New Tampa Highway between Wabash Avenue and Galloway Road. Barmby believes this is an area of Lakeland that probably has the least amount of auto ownership. “I’ve seen people walking and riding on the paved shoulder. These are folks trying to get back and forth to work and transit and they have no other option.” said Barmby. “Having a sidewalk on the north side of the road, and some transit stop upgrades as well, is going to provide a huge benefit,” he added.

Barmby said that the TPO is funding improvements on Wabash from Olive Street to Ariana Street, DOT is providing funding for a sidewalk on the north side of Ariana between Wabash and Harden Boulevard, and the county recently constructed sidewalks on Main Street from Fairway Avenue to Combee Road. He noted that the groups are trying to bring together a good bike/pedestrian system in low-income areas that really need it.

“The City Commission on Monday approved an agreement with the county to provide them $150,000 to support a sidewalk on Chestnut Road,” said Barmby. He noted that the $800,000 project is currently the city’s highest sidewalk priority and is needed to improve access to transit and Kathleen High. A construction date hasn’t been set as the county is the lead on the design work and easements.

Barmby said there has been a change in the sidewalk priorities during his time in Lakeland, “When I first came to Polk County in 1994, the county had no money for sidewalks. Now countywide there is two to two-and-a-half million a year allocated for sidewalks.” He added that the challenges are in the periphery of the city where the infrastructure is substandard with open drainage, narrow roads, and no street lighting. “Those areas are we see most of the severe crashes on the bike and ped side,” Barmby said.

In an effort to reduce the chances of pedestrians in the crosswalks when drivers run red lights, Rao said the city is about to test a program they call Intersection Collision Avoidance Safety Program or ICASP. The program uses the city’s intersection cameras to predict red light runners and hold the intersection at all red lights for cars and pedestrians for a few seconds longer to avoid a collision at the intersection. Rao believes 60-90 days of predicting, but not activating the all red hold, should give him the data needed to see if the program would work.

Barmby and Rao emphasized they have seen the pedestrian safety reports and data and are cognizant of the problems. They said there are multiple agencies in the community that are putting resources, staff, and money to develop improvements, but it isn’t a fast or easy task. “I say it’s like turning a tanker in a hurricane. We know we have a bicycle/pedestrian crash problem in our community. There are a number of factors such as when the roadways were designed, our land use patterns, pedestrians needing to be more visible particularly at night.” Barmby added that some of the biggest projects, like the reconstruction of Memorial, may take up to ten years to improve where some of the more severe crashes are occurring.

“If I could give one message, I would say to motorists, please control your speed. Please behave according to the speed limit proscribed. It’s there for a reason. Most of the time you’re just speeding to a red light. You’re gaining nothing.” Rao said.